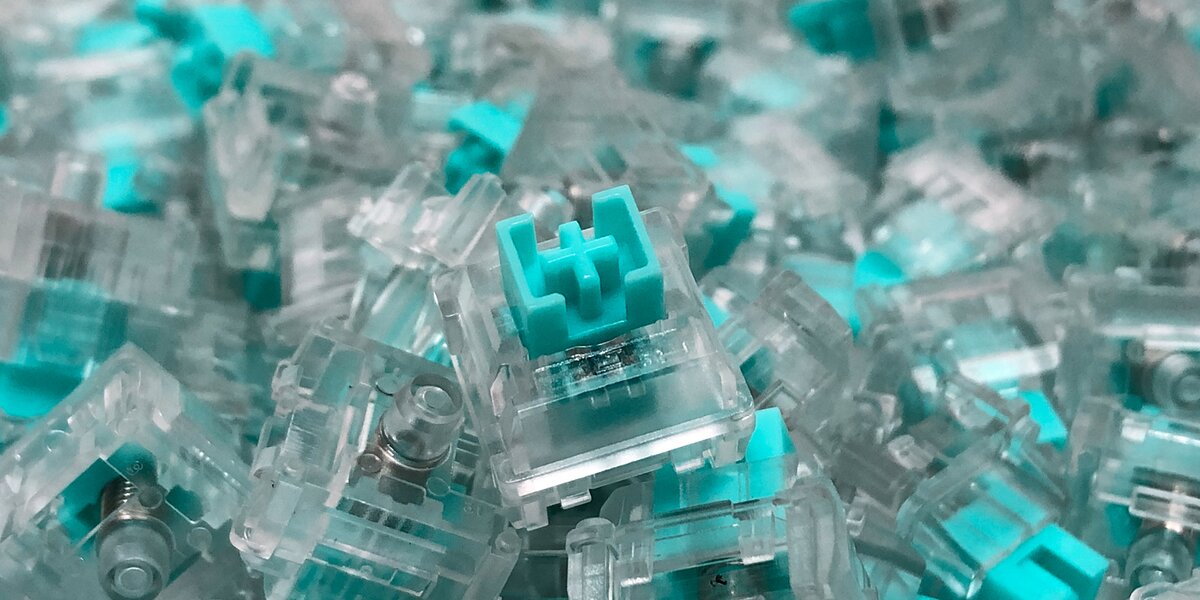 The best keyboard switches for gaming

The most overlooked and potentially game-changing hardware upgrade is right below your fingertips: keyboard switches. A poor quality keyboard with unreliable switches may birth a few frustrating issues, for instance, key chatter or input delay. As a competitive gamer, you will need the lowest possible input delay for the best possible performance.

This is what you need to know about keyboard switches and what works best for gaming.

All switches have one purpose, to activate or deactivate a key. When a key is active, it’ll send data to the computer, registering your press until the key is deactivated.

The digital function of a switch, active or non-active, is very simple. That’s why there are multiple types of switches with the same or different technology. The most common technology is a leaf switch, this is the simple act of connecting 2 copper leaves to activate the key. These are available in many types with different characteristics but the same technology.

An uncommon technology is the Hall effect switch, a magnet inside the switch is measured by a magnet sensor on the keyboard. Depending on the magnet’s proximity to the sensor, it activates the key.

The moment a key is registered as activated is your actuation point. This is usually expressed in a position over the switch travel distance. A typical mechanical keyboard switch has an actuation point set at 2mm.

The moment a key is registered as deactivated is your reset point. Just like an actuation point, it’s expressed in a position over the switch travel distance. A typical mechanical keyboard switch has a reset point near the actuation point, around 1.8mm.

When the key reaches its actuation point you’ll receive audible or tactile feedback from the switch. There are 3 types: Audible, Tactile, or None. Audible feedback is typically a metal click sound, tactile feedback is in the form of a slight bump in the press, and none has no feedback at all. The latter is commonly referred to as Linear switches.

When you press the switch, you need to apply a certain amount of gram force to press it down. This is typically displayed in a graph with Y axis being the gram force and X axis the travel distance in millimeter (mm).

When shown without a graph it can be displayed in several ways:

Operating force can’t be used with switches that have a variable actuation or reset point.

Now that you’re familiar with a few basics, we’re going to take a look at a list of different switches that are often used for gaming.

Note that these switches are a list of examples, there’s an exhaustive amount of different switches with slight variations and build quality, we’re focused on how to pick the right one and not “the one”.

If you were sharp, you noticed a few switches have a acctuation/reset range. These are analog switches, meaning the actuation (and reset point) can be adjusted over the switch range by software. These types of switches are usually also paired with a technology that allows variable input, such as magnetic (hall effect) switches. You can call these “Analog switches''. Contact leaf switches are in all cases incapable of variable input.

What switches are good for gaming?

Competitive gamers have different switch requirements than casual users or fast typers. As a gamer you’re looking for the fastest response with the least effort and best durability. You can sacrifice the latter if you’re dead serious and it’d give you an edge. Otherwise, you want the keyboard to last the repetitive presses (looking at those qwerasdafzcxv keys).

The force curve of a switch comes down to individual preference and what you’re accustomed to. In general, you want to find a switch that is effortless to press repeatedly. This reduces time to press the key to actuation point and significantly lowers fatigue.

Avoid Audible or Tactile switches, (None) Linear switches is the way to go. Audible switches often also have (though slight) tactile feedback. You don’t want any inconsistencies or added gram force to activate a key. The Audible/Tactile feedback from these switches rarely makes you press the key down less far or tiptoe keys. Ironically, tactile switches will ensure you’ll press to the end of the key. The gram force increases significantly right before the actuation point and quickly returns to a lighter gram force. You’ll have a hard time not slipping to the end.

You’ll unconsciously use the moment of greatest impact as feedback regardless if it clicks or bumps. This is the end of the press.

The earlier the key actuates (activates), the faster the response is. This goes hand-in-hand with lightweight gram force switches but doesn’t change fatigue. It’s almost inevitable that you’ll press the switch to the end or near the end of the press, regardless of the actuation point.

The earlier the key resets (deactivates), the faster the response is. This is easily overlooked and as critical to the actuation point. Deactivating a key also results in an action in games with movement or timing.

The exception here is Wooting’s Lekker switches that have a feature called Rapid trigger. Rapid trigger mitigates return travel by making the reset point dynamic. It’ll reset (deactivate) the key depending on the amount you release it, as little as 0.1mm, instead of having a fixed reset point.

The switch technology will decide how a switch is actuated, which inherently can have input delays. The commonly found contact leaf switches for example have a minimum input delay of 5 milliseconds (ms) due to bounce rate. Depending on the quality of the switch, this can take longer and degrade faster. When the switch bounce rate surpasses the keyboard’s firmware “debounce” rate (an artificial delay to wait for the bounce rate), you’ll get keychatter.

If you’re not familiar with the above, what impacts keyboard latency and causes key chatter is a different topic. The takeaway here is that any type of bounce rate is best avoided.

The more presses a switch can take, the longer your keyboard will last. As a gamer, you’re going to use a certain cluster of keys frequently and possibly aggressively. It’s good to know you can rely on

Unfortunately, you can’t only look at the stated key presses and take the highest number. Not all switches are equal in quality and simply can’t guarantee that every single switch on your keyboard will last that amount of presses without key chatter or degradation. A lot of manufacturers don’t even press those amount of times and give an estimated total.

If you have a hot-swappable keyboard, you’ll already be ensured that regardless of the durability, you can easily swap it out. Otherwise, contactless switches (optical, magnetic, capacitive) can take greater duress and shouldn’t suffer from key chatter.

Analog switches give the greatest flexibility in actuation point, but the availability is limited to a few brands, without the option to install the switches on any (hot-swappable) keyboard you like. The adjustable actuation point is incredibly powerful if you find yourself miss pressing or not wanting the same actuation point on each key.

Analog switches also unlock more features, depending on the manufacturer. An example is in-game analog movement with either Razer’s optical switches or Wooting’s magnet Lekker switches.

It still needs to type

If you’re purely purchasing a keyboard for high level competitive gaming, you’re less concerned with the typing feel and performance. But most likely, you’re not going to own multiple keyboards or switch them around a lot.

This is where personal preference comes into play and it’ll surely conflict with your gaming preference.