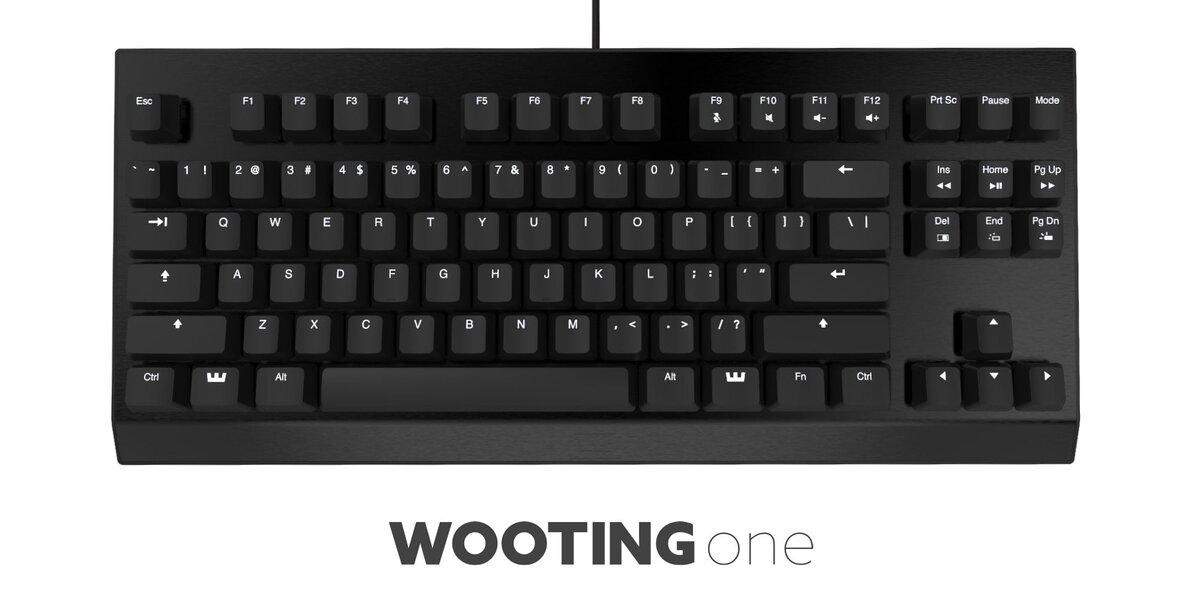 It's been killing us not to talk about this sooner, but we decided not to get ahead of ourselves. Now that time has passed. Meet The Wooting one, the first tenkeyless mechanical keyboard with analog input for precise control. It brings an entirely new experience to gaming and we believe it's the future of PC gaming.A quick example.[video width="1280" height="720" mp4="https://blog.wooting.nl/wp-content/uploads/2016/02/Burnout-Racing-game-v1.mp4" webm="https://blog.wooting.nl/wp-content/uploads/2016/02/Burn_game1.webm" loop="true" autoplay="true"][/video]I'll be talking more elaborative about Analog than our updated website, be sure to check out the entire video as well.So let's begin!

The Wooting one Keyboard

We thought long and hard about a suitable keyboard name, but when looking at other keyboards, we really didn't like those fancy "gaming" names (e.g. Prism Raptor Ultimate Mega Own Noobs Keyboard), wanted to avoid any technical names (e.g. TKL MK167 WKL) and didn't like those combined tricky names to highlight it's special feature (e.g. Anawoo, Alogkey or whatever).Instead, we wanted to embrace the keyboard, not separate it from our main brand and keep it simple. So, we decided to start counting from one.

An ordinary keyboard only has digital input. This means it sends merely on/off signals. For example, you tap the spacebar once, the PC will think OH ITS ON! and then it's off. So what if you hold down the spacebar? The PC will just see ON..off ON..off ON..off at a repeated rate.Analog, however, works differently.[caption id="attachment_522" align="aligncenter" width="500"]

Analog Input[/caption]Analog means you can send multiple or variable inputs to the PC with a single button. This is very similar to pressing down a trigger button- or joystick (A.k.a thumbstick, analog stick) towards any angle on a controller, it will send different signals based on how far down you've pressed it.The Wooting one can read exactly how far down you've pressed a key for analog input. As you can see from the animation above, the further down you press a key, the stronger the signal gets from 0 to 100%.That's not all our keyboard can do. It can also detect how fast down you press a key, so it measures your speed. Also an analog input. For example, if you press a key all the way down to 100% within half a second, it will activate function A, if you press it down slower than half a second, it will activate function B. We've not announced this on our website because we don't want to confuse anybody, but just keep this in mind for later.That the keyboard has analog input keys, doesn't mean that it can't send digital input anymore. It's capable of both.A lot of repetition, but I want to make sure you see it as a new input dimension before anything else.

For gaming, analog input has one very obvious application; you can control your movement speed and turns with the WASD similar to a joystick. Something that has been lacking in PC games for a long time.Like so:[video width="1238" height="720" mp4="https://blog.wooting.nl/wp-content/uploads/2016/02/Isaac-2d-game-v1.mp4" webm="https://blog.wooting.nl/wp-content/uploads/2016/02/Isaac-2d-game-v1_CLIPCHAMP_keep.webm" loop="true" autoplay="true"][/video]That's the first implementation you're able to use right now, but...The big question is how would you use analog input in games?Don't think technical, don't think about limitations, everything is possible and remembers, not only does it measure how far down you've pressed a key, it can also measure how fast you've pressed a key.To remind you: The following is conceptual and an ice breaker to think further than what you've seen so far.Here are a couple of examples:

The slower you press down a key from 0 to 100%, the harder the punch you give, for example, boxing games. If you press the key very fast, it will simulate jabs. When you press a key down slowly, your jabs will pack more punch, at the cost of the time it takes you to press it down slowly. It requires more timing, fines and focus during exciting moments.

From 0 to 100% will animate you attack in melee games. For example, in a medieval game, you're a knight with a big two-handed sword. one of your killer moves is a vertical strike coming from above your head all the way down to the ground. The further down you press a key, the further into the slashing animation you are up to 100% you hit the ground. Now you're able to control the strength of that hit yourself or prepare strikes a bit more in advance.

In MOBA games such as League of Legends, you're already familiar with quick casting. When you activate a key it will immediately cast your skill, instead of showing the skill range plus clicking. The pro, you cast it immediately without any delay. The con, you can't see the range at all. With "smarter quick casting", you will see the casting range when you press the key down until you reach 100% and then you cast it.

Many gaming brands out there are promoting the early activation point of their switch, but what if you would be able to decide yourself when the key activates? Change the actuation point of the individual keys to your liking for even faster actuation.

Analog input for other things

We don't want to limit everybody to use it merely for gaming, that would defeat the purpose of it being an input device. Besides, we recognize that even the most hardcore gamers also have their normal life or work to attend and expect different things from their keyboard. Especially as a PC gamer, you probably use that beast of a computer for other things too!So, also, ask yourself; how would you use the analog input for things outside of gaming?To remind you: The following is conceptual and an ice breaker to think further than what you've seen so far.Here are a couple of examples:

Scrub smoothly with precise control through your edit.

Produce different sounds based on the speed and/or depth of a key press. Similar to playing the piano and pressing a key string hard or soft.

Everybody has their own unique typing behavior and input methods. The keyboard can trace this unique typing identity and recognize it's you filling in the correct password.

The keyboard has onboard memory (further details t.b.a.), so no matter which PC you plug it in, it will have all your settings stored inside. But there are quite some things you'll be able to customize on the keyboard and that's a lot easier to setup with some good ol' software on the PC.I don't want to go into too many details here yet, but related to the topic, the software will allow you to enhance the analog experience and, more importantly, allow users to make their own analog functions.Will get more into this further down the road.

We like opinions, feedback, and criticism. So join the conversation and let us know:

1. How would you use the Wooting one analog input in games?

2. How would you use the Wooting one analog input outside of games?