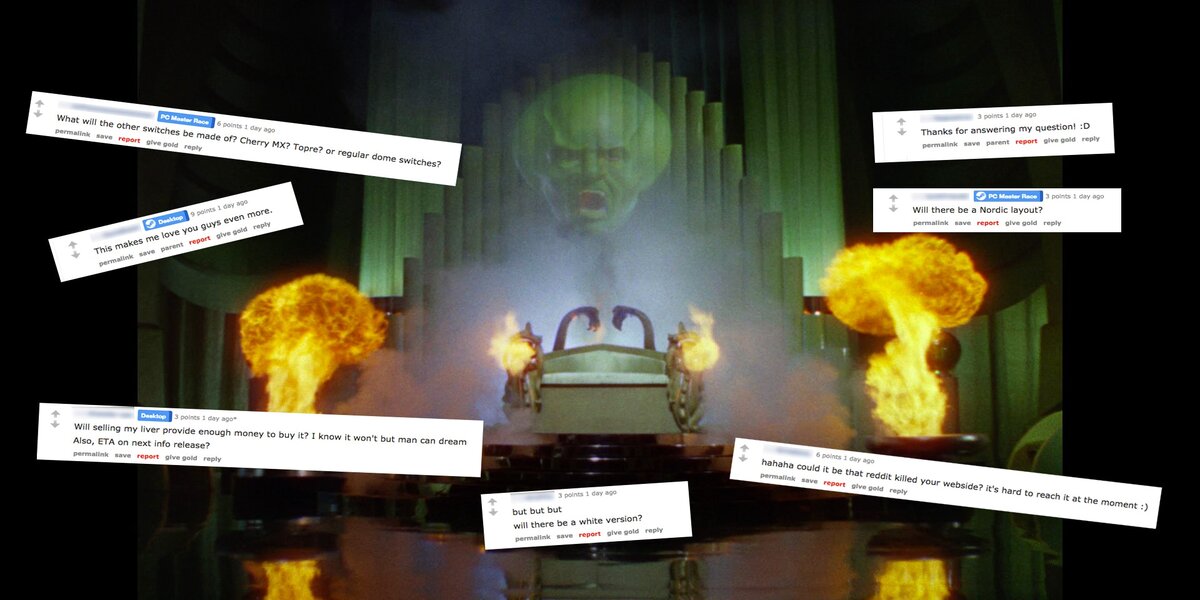 Amazing Feedback on Wooting one from PC Master Race and others!

In these last couple of days, the r/PC Master Race (PCMR) community has shown us an incredible amount of support and feedback. It's given us an incredible amount of motivation, willpower and insight that we'll be needing in what's to come.We've spent over 8 hours straight answering people in the PCMR Ask Me Anything (AMA) with nothing less than pleasure. Afterward, we've continued answering questions from everybody on Twitter, Facebook, DM's and Email. We want to give special thanks to everybody that participating in the PCMR AMA and everybody else that's connected with us for feedback and support.We've taken everything into consideration, at this moment it's too early to draw any major conclusions but you've already majorly influenced our coming action plans.We mention it to others often; We can only come up with so many ideas while an entire community can come up with millions.

The overwhelming amount of support has resulted in some tech websites to feature us, such as Slashgear, Gizmodo and from our own country Tweakers.net and Hardware.info. We've also been contacted by a handful reviewers that can't wait to get their hands on the Wooting one. All good-good.Since we are quite serious about what we claim to do, we went through literally all the input that we've received and want to share some of the highlights. We've also made a handy FAQ.

"The idea is cool, but what is stopping someone like Razer from stealing your idea and releasing their own keyboard with analog keys""I play Arma 3 a lot. I NEED the numpad keys. Else I can't play that game. So that is an important reason for me :)" "Will we be able to disassemble it? So that we can paint it."

"Why not release a separate num-pad that fits with the Wooting one" "(...) I'd also be very interested in seeing a tactile style switch with an analog input, something like an MX brown with 3 different bumps the more you push it down would be amazing.""Hey, just wanted to suggest using USB type C for the cable. It's just so much more comfortable,"

Some love and support

"What's the noise level, in AtoD counts, on the key input?""Ass or tits"

"I bet this gets annoying real fast. Constantly having to precisely press the right amount of pressure will probably be horrible for your fingers""This is the most retarded idea anyone has ever come up with""Even my poor man's Logitech K120 has a numpad"

" 'No more jerky movements while following NPCs!' Proceeds to walk just as jerky as before.""Why is the name so stupid? Wooting one?!""Razer makes one tomorrow and charges £150 for it with shitty build quality"Check out the handy FAQ

When we decided to announce the analog feature in our keyboard, we hadn't thought it would get picked up so fast, but it did, and that's rather a good thing than a bad because we want to accelerate our entire development process in both hardware as software.That's why we need your help by supporting us. We have found a couple of great investors who made it possible for us to get started and capable of producing a basic model but it's not at the point where we want it to be and in longer terms, everything together is a lot more costly.If we only release the Wooting one without further support and development, then it will be written in history as a gimmick and remembered as an "oh they tried, but this is not viable".I'm sure you agree, we don't want that to happen.To make this a real success, we need to fight towards making analog input in a keyboard an industry standard. The only way we can achieve that is by creating an open platform that can fully utilize the analog keyboard input and allow modders, developers and anybody with a playful mind to create new applications and support for existing applications/games.That's why we're planning to raise additional funds through crowdfunding to accelerate the entire process. This will not only help accelerate everything by hiring additional help, it will also allow us to create other variations of the keyboard, improve the technology, decrease the cost and support multiple languages.

When we just started this project, we told ourselves that we should always seek out for feedback, stay true to ourselves and everybody around us. That's why our communication channels are always open for everybody and when we get the chance, we answer as many people as we can.So, don't feel like you missed out and share your opinion, concerns, thoughts, ideas, questions, critical thinking or anything that pops into your mind with us by: